Smooth or local corrosion can be observed depending on the electrochemical properties of the coating - the base metal system, the environmental conditions, the layer structure, the density and the porosity.

To reduce the corrosion of metals, various methods can be used: 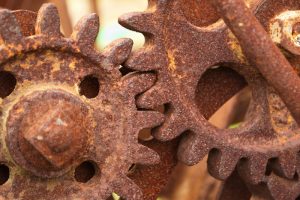 The corrosion behavior of ferrous metals can be improved by metallic inorganic coatings. The metal substrate of components is electroplated with a less reactive metal.
All YTSAB's corrosion-resistant coatings form an impermeable barrier between the base metal and the external atmosphere to provide the best performance and longest service life for your components.

Chemical corrosion can be considered as oxidation and occurs through the action of dry gases, often at high temperatures. Electrochemical corrosion, on the other hand, occurs through electrode reactions, often in humid environments, ie wet corrosion. All metals in dry air are covered by a very thin layer of oxide, about 100Å (10-20nm) thick. This layer is made up of a chemical reaction with the oxygen in the air. At very high temperatures, the reaction with the oxygen in the air can continue without restraint and the metal will quickly transform into an oxide.

The corrosion of steel can be considered as an electrochemical process that takes place in several steps. The initial attack occurs at anodic sites on the surface where iron ions dissolve. Electrons are released from the anode and move through the metal structure to the adjacent cathodic sides of the surface, where they combine with oxygen and water to form hydroxyl ions. Furthermore, hydroxyl ions react with the iron ions from the anode to form iron hydroxide, which itself is further oxidized in air to produce hydrogenated iron oxide (ie red rust). The sum of these reactions can be represented by the following equation:

Wet time is the proportion of the total time during which the surface is wet due to rain or condensation. It follows that for unprotected steel in dry environments, e.g. indoors, corrosion will be minimal due to low availability of water. 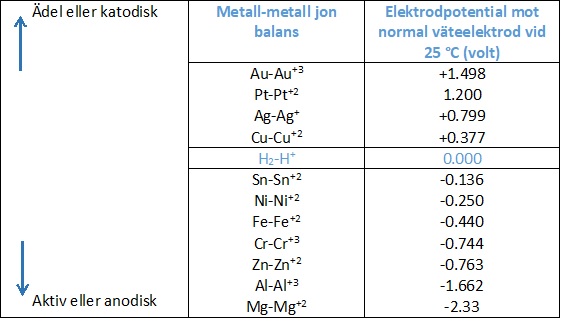 With regard to the iron-copper example, it will be noted from the table above that copper has a higher potential (is nobler) than iron. The iron will be the anode and corrode, while the copper will be the cathode and not corrode.

General corrosion is characterized by an overall attack on the surface. Corrosion occurs without distinct anodic and cathodic areas.

Local corrosion is the opposite of general corrosion. In the case of local corrosion, most of the metal surface is unaffected and only small areas are strongly affected. It is much easier to compensate for even corrosion and to take preventive measures in the design than to take local corrosion attacks into account.

When two different metals are electrically connected and in contact with an electrolyte (= liquid), they form a galvanic cell where the noble metal is cathodic and the less noble anodic. The anodic material will corrode. The corrosion rate depends on:

Typical examples of pitting can be seen on aluminum and stainless steel in liquids containing halogen ions. Corrosion protection of these materials depends on a thin surface oxide film. Mechanical damage or an inhomogeneous area in the oxide film can be the starting point for corrosion attacks. The conditions in the pit are characterized by lack of oxygen and low pH, which intensifies the corrosion attack. It is quite difficult to detect pitting early because the infested surface is very small.

Stress corrosion is a combined effect of stresses, external or internal, and a  corrosive environment. Tensile stresses arise, for example, when working on sheet steel or from directly applied loads. As a result, a layer is damaged and corrosion can be initiated. To avoid stress corrosion, tensile stresses should be removed, e.g. by heat treatment after cold working or welding.

Filiform corrosion occurs under painted or plated surfaces when moisture penetrates the coating. It is a type of localized corrosion that is often associated with aluminum and magnesium alloys that have an organic coating. Lacquered surface and quick-drying paints on a surface are most susceptible to the problem. Filiform corrosion tends to occur at high humidity, e.g. greater than 75% and temperatures above room temperature.

Selective corrosion occurs in metals where some of the alloying elements or impurities are less noble than the other parts of the material. A single element in an alloy is attacked and dissolved in the alloy structure. Consequently, the alloy structure weakens.