Electroplating, also known as electrochemical deposition or electrodeposition, is a process for producing a metal coating on a solid substrate through the reduction of cations of that metal by means of a direct electric current. The part to be coated acts as the cathode (negative electrode) of an electrolytic cell; the electrolyte is a solution of a salt of the metal to be coated; and the anode (positive electrode) is usually either a block of that metal, or of some inert conductive material. The current is provided by an external power supply.

Electroplating is widely used in industry and decorative arts to improve the surface qualities of objects—such as resistance to abrasion and corrosion, lubricity, reflectivity, electrical conductivity, or appearance. It is used to build up thickness on undersized or worn-out parts, or to manufacture metal plates with complex shape, a process called electroforming. It is used to deposit copper and other conductors in forming printed circuit boards, and copper interconnects in integrated circuits. It is also used to purify metals such as copper.

The term "electroplating" may also be used occasionally for processes that use an electric current to achieve oxidation of anions on to a solid substrate, as in the formation of silver chloride on silver wire to make silver/silver-chloride (AgCl) electrodes.

Electropolishing, a process that uses an electric current to remove metal cations from the surface of a metal object, may be thought of as the opposite of electroplating. 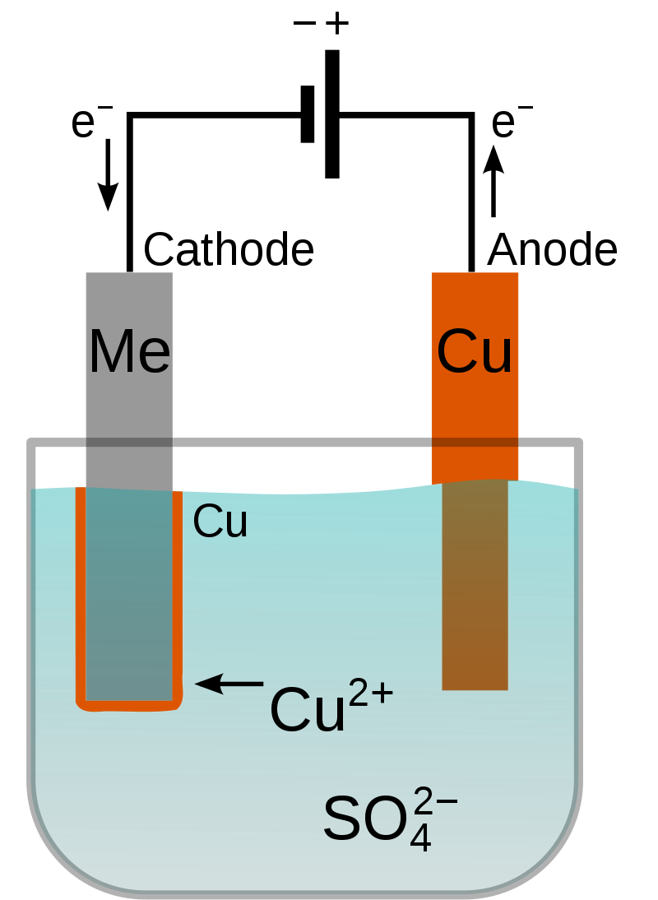 Simplified diagram for electroplating copper (orange) on a conductive object (the cathode, "Me", gray). The electrolyte is a solution of copper sulfate, CuSO
4. A copper anode is used to replenish the electrolyte with copper cations Cu2+
as they are plated out at the cathode.

The electrolyte should contain positive ions (cations) of the metal to be deposited. These cations are reduced at the cathode to the metal in the zero valence state. For example, the electrolyte for copper plating can be a solution of copper(II) sulphate, which dissociates into Cu2+ cations and SO2−

4 anions. At the cathode, the Cu2+ is reduced to metallic copper by gaining two electrons.

When the anode is made of the coating metal, the opposite reaction may occur there, turning it into dissolved cations. For example, copper would be oxidized at the anode to Cu2+ by losing two electrons. In this case, the rate at which the anode is dissolved will be equal to the rate at which the cathode is plated and thus the ions in the electrolyte bath are continuously replenished by the anode. The net result is the effective transfer of metal from the anode to the cathode.

The anode may instead be made of a material that resists electrochemical oxidation, such as lead or carbon. Oxygen, hydrogen peroxide, or some other byproducts are then produced at the anode instead. In this case, ions of the metal to be plated must be periodically replenished in the bath as they are drawn out of the solution.

The plating is most commonly a single metallic element, not an alloy. However, some alloys can be electrodeposited, notably brass and solder. Plated "alloys" are not "true alloys" (solid solutions), but rather they are tiny crystals of the elemental metals being plated. In the case of plated solder, it is sometimes deemed necessary to have a true alloy, and the plated solder is melted to allow the tin and lead to combine into a true alloy. The true alloy is more corrosion resistant than the as-plated mixture.

Many plating baths include cyanides of other metals (such as potassium cyanide) in addition to cyanides of the metal to be deposited. These free cyanides facilitate anode corrosion, help to maintain a constant metal ion level and contribute to conductivity. Additionally, non-metal chemicals such as carbonates and phosphates may be added to increase conductivity.

When plating is not desired on certain areas of the substrate, stop-offs are applied to prevent the bath from coming in contact with the substrate. Typical stop-offs include tape, foil, lacquers, and waxes.

The ability of a plating to cover uniformly is called throwing power; the better the throwing power the more uniform the coating.